But as for you, brethren, do not grow weary of doing good. 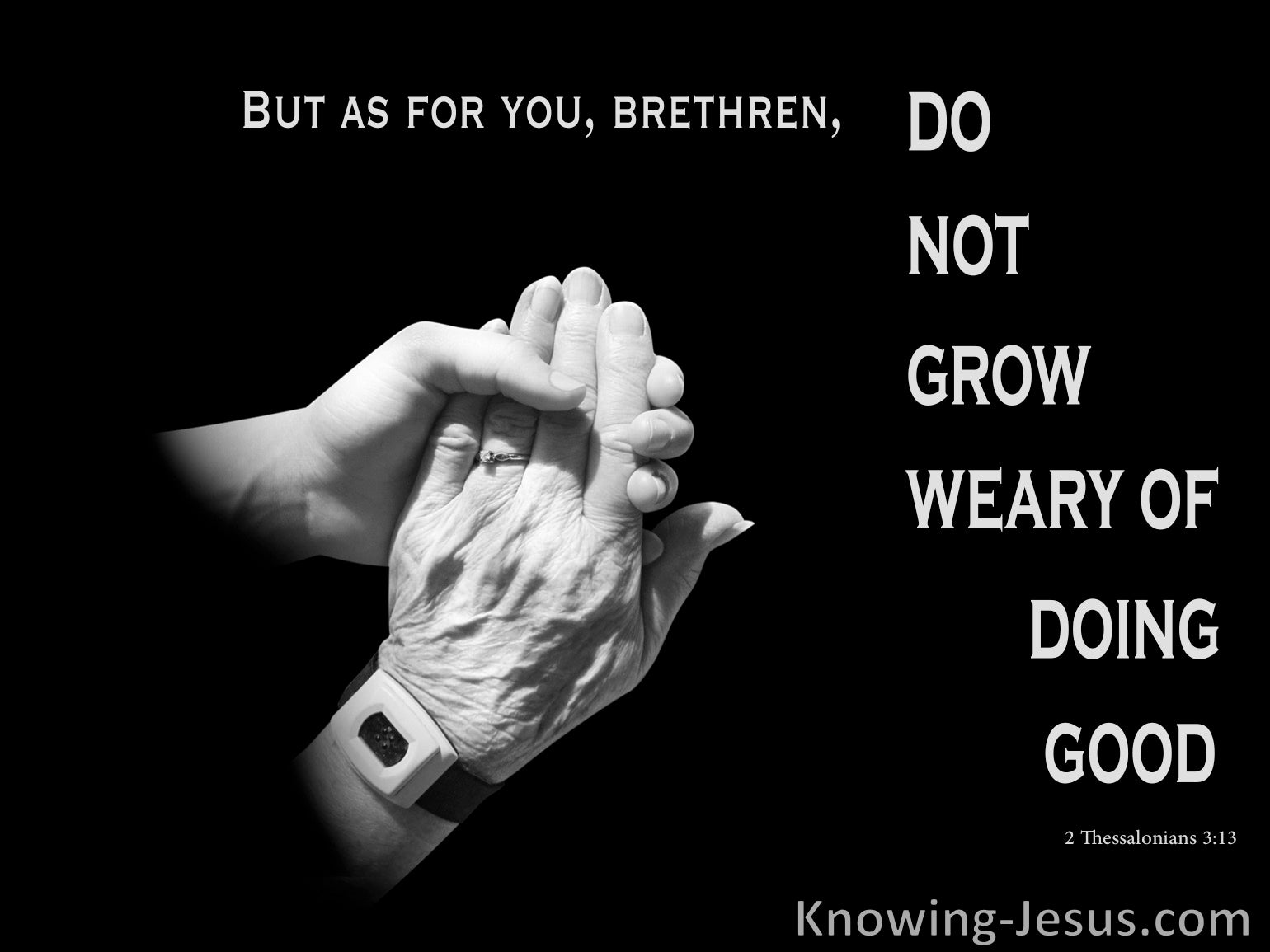 At last they understood that He wasn speaking about the yeast in bread, but about the deceptive teaching of the Pharisees and Sadducees. (Matthew 16:12 NLT)

There has come into this universe something that disturbs the universe. All these terrible wars, about which you know something, are the result of this disturbing influence which has come into the universe. There is something in this universe that stirs up human nature. Like alcohol, it makes men fight against one another. It keeps the world in unrest. It produces all this excitement of the human evil nature. Then, again, this something that has come into this universe results in an enlargement that is quite unnatural a false development.... Anything that results in unnatural development and enlargement is evil. The Apostle Paul said, "Through the grace given unto me, to every man that is among you, not to think of himself more highly than he ought to think; but to think soberly, according as God hath dealt to every man the measure of faith." Anything that makes us unnaturally big is evil, whether it be the individual life, or whether it be what is called the work of God, trying to make it bigger than its real spiritual measure, inflating it beyond its genuine spiritual degree; that is something evil, that is leaven....

Then what about this leaven that makes things appeal to our natural taste? Paul said to Timothy, "The time will come when they will not endure sound teaching; and they will heap to themselves teachers, having itching ears." And he goes on to say that they will believe the lie instead of the truth. Why is that? Because these teachers appeal to the natural life. These teachers cover over evil. Indeed, they will sometimes call evil good. People do not like the teachers who tell them what is wrong, that this thing and that thing are contrary to God. They like leavened bread, it pleases the flesh.... He says there will be leaven, there will be corruption and defilement everywhere, but the teaching of the New Testament is: Keep yourselves pure. See that your garments are not spotted. Walk in this sinful world as those who do not belong to its nature. Although there is leaven everywhere, you be the unleavened bread. But, the world may not like you, the world will not like unleavened bread. It does not please the flesh, but the bread which is pure is pleasing to God.

They shall put My name on the children of Israel, and I will bless them.

O Lord our God, masters besides You have had dominion over us; but by You only we make mention of Your name. § We have become like those of old, over whom You never ruled, those who were never called by Your name.

All peoples of the earth shall see that you are called by the name of the Lord, and they shall be afraid of you. § The Lord will not forsake His people, for His great name’s sake, because it has pleased the Lord to make you His people.

O Lord, hear! O Lord, forgive! O Lord, listen and act! Do not delay for Your own sake, my God, for Your city and Your people are called by Your name. § Help us, O God of our salvation, for the glory of Your name; and deliver us, and provide atonement for our sins, for Your name’s sake! Why should the nations say, “Where is their God?” § The name of the Lord is a strong tower; the righteous run to it and are safe.

The heavens declare the glory of God;and the firmament shows His handiwork.

Since the creation of the world His invisible attributes are clearly seen, being understood by the things that are made, even His eternal power and Godhead. § He did not leave Himself without witness. § Day unto day utters speech, and night unto night reveals knowledge. There is no speech nor language where their voice is not heard.

When I consider Your heavens, the work of Your fingers, the moon and the stars, which You have ordained, what is man that You are mindful of him, and the son of man that You visit him?

Therefore, being justified by faith, we have peace with God through our Lord Jesus Christ" (Rom. 5:1).

There will be no standing against the enemy's accusations until we are firmly assured of, and settled on, the fact that our Father is at peace with us because of our living union with His Beloved Son. And this alone will give us peace with our Father.

"We thought we were being more Christian by striving more, praying more, reading our Bible more, and confessing our sins more. But all that brought no relief. The awful gnawing in our vitals continues. The sense of guilt increases. We need not a Nathan to say, Thou art the man!' A thousand voices are forever ringing in our ears giving the lie to what we long with infinite yearning might be an altogether convincing testimony of a truly Christian walk.

"Now the way out is to be found in a clear-cut recognition of the fact that, as Paul says in Romans 8:1, There is, therefore, now no condemnation to them that are in Christ Jesus.' Let appearances, voices and feelings to the contrary be what they may, still this is a fact. The reason, of course, is found not in ourselves, but in Another." -F.J.H.

"It is a wonderful thing to have the consciousness that we are in living union with the Lord Jesus in heavenly glory, knowing our position in that risen sphere, participating in all that constitutes His life in the blessed circle of love and rest where He lives unto the Father. If we apprehend this we shall not be deceived by what goes on upon the earth." -C.A.C.

The "Go" Of Unconditional Identification

The rich young ruler had the master passion to be perfect. When he saw Jesus Christ, he wanted to be like Him. Our Lord never puts personal holiness to the fore when He calls a disciple; He puts absolute annihilation of my right to myself and identification with Him - a relationship with Him in which there is no other relationship. Luke 14:26 has nothing to do with salvation or sanctification, but with unconditional identification with Jesus Christ. Very few of us know the absolute "go" of abandonment to Jesus.

"Then Jesus beholding him loved him." The look of Jesus will mean a heart broken for ever from allegiance to any other person or thing. Has Jesus ever looked at you? The look of Jesus transforms and transfixes. Where you are "soft" with God is where the Lord has looked at you. If you are hard and vindictive, insistent on your own way, certain that the other person is more likely to be in the wrong than you are, it is an indication that there are whole tracts of your nature that have never been transformed by His gaze.

Jesus said, "One thing thou lackest . . ." The only "good thing" from Jesus Christ's point of view is union with Himself and nothing in between.

Jesus said, "Sell whatsoever thou hast . ." I must reduce myself until I am a mere conscious man, I must fundamentally renounce possessions of all kinds, not to save my soul (only one thing saves a man - absolute reliance upon Jesus Christ) - but in order to follow Jesus. "Come, and follow Me." And the road is the way He went.

But as many as received Him, to them He gave the right to become children of God, even to those who believe in His name.
John 1:12

In the beginning, God created the universe and made everything that is in it. He made the earth; the plants; the animals. Finally, He made man in His own image. Man was created a tripartite being – with a spirit, a soul, and a body. He was given attributes and characteristics that reflected his Creator God – a mind to think – a will to choose and a range of beautiful emotions to feel.

When Adam was formed He was unique among the vast array of created. He was distinct from all other living things – singularly made in God’s own likeness. God said, 'Let us make man in our image, in our likeness, so that they may rule over the fish in the sea and the birds in the sky, over the livestock and all the wild animals'.

Everything that God made for man to richly enjoy was good – oh, so very, very good, but Adam’s sin caused the creation to be cursed and man lost His regal position. Adam’s sin caused God to set in motion His eternal plan and purpose for humanity. God intended to redeem man of his sins and restore him to his rulership position, but God intended to do much more for man – to provide him with so very much more.

God purposed His own Son would shed His innocent blood to pay the tremendous price for the sin of the entire human race – as God’s perfect Law required. God’s plan was not simply to restore man to his original position – where sins could be forgiven and a right standing between God and man could be restored. God did not plan to restore all that Adam lost when he rebelled against his Creator. His plan was to elevate man to a position of far greater eminence than ever before.

A new creation and

AMAZING LOVE! How can it be,
That Thou, my God, shouldst die for me?

Eternal God became incarnate Man, and the Man Christ Jesus has two comings. His first advent was His birth – a refugee, born in a simple, cold cattle stall. His second appearance is His return as KING of King and LORDS of Lords. At His first arrival, He was a homeless stranger. He had no place to call His own. Next time every knee will bow before Him and He will govern the whole earth.

Mortal man has been redeemed and made to sit with Christ in heavenly places. Why oh arrogant man, why oh foolish woman do we expect any better treatment? Who am I and who are you to that we should not walk the same path as He trod?  This earth is not our home – we are passing through until our second coming. We were born into this world, dead in trespasses and sins – cast out from God.