I don have any silver or gold for you. But Il give you what I have. In the name of Jesus Christ the Nazarene, get up and walk! (Acts 3:6 NLT)

The members of the new heavenly Israel are people who have been delivered from self-interest into God's interest, who have been put on their spiritual feet by Jesus Christ and are walking in strength in the way of the Lord. Do you not think it is a very significant thing that the first miracle after the Day of Pentecost was the raising of an impotent man at the gate of the temple in Jerusalem? These are not just pretty stories put together to make an interesting book. God knows what He is doing, and when He makes the first miracle of the Christian era the raising of an impotent cripple, He is saying that the people of this new Israel are people who have been delivered from this impotence and put on their feet spiritually.

There are a lot of Christian cripples about! They cannot get on their own feet, nor can other people put them there. You try to pick them up! They may take a step or two, and then down they go again. There are many like that, and you can spend your life trying to get them up on their feet. What is it that is eating the very life out of them? What is it that is making them such helpless cripples that they cannot walk? It is self-centeredness. Make no mistake about it, it is self in some form. It is self that wants to be taken notice of. It is self in the form of pride. This poor man was delivered because he knew his own helplessness and he believed what Jesus said. He believed on to Jesus Christ, which means that he believed out of himself. Yes, that is the secret that we shall turn from our miserable selves and cease to be occupied with them, saying once and for all: "I am done with you, wretched self. I throw myself on to Jesus Christ. I take the one great step of committal." Jesus never lets such a person down.

By T. Austin-Sparks from: The On-High Calling - Chapter 2 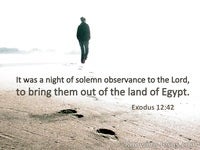