in order that I may attain to the resurrection from the dead. 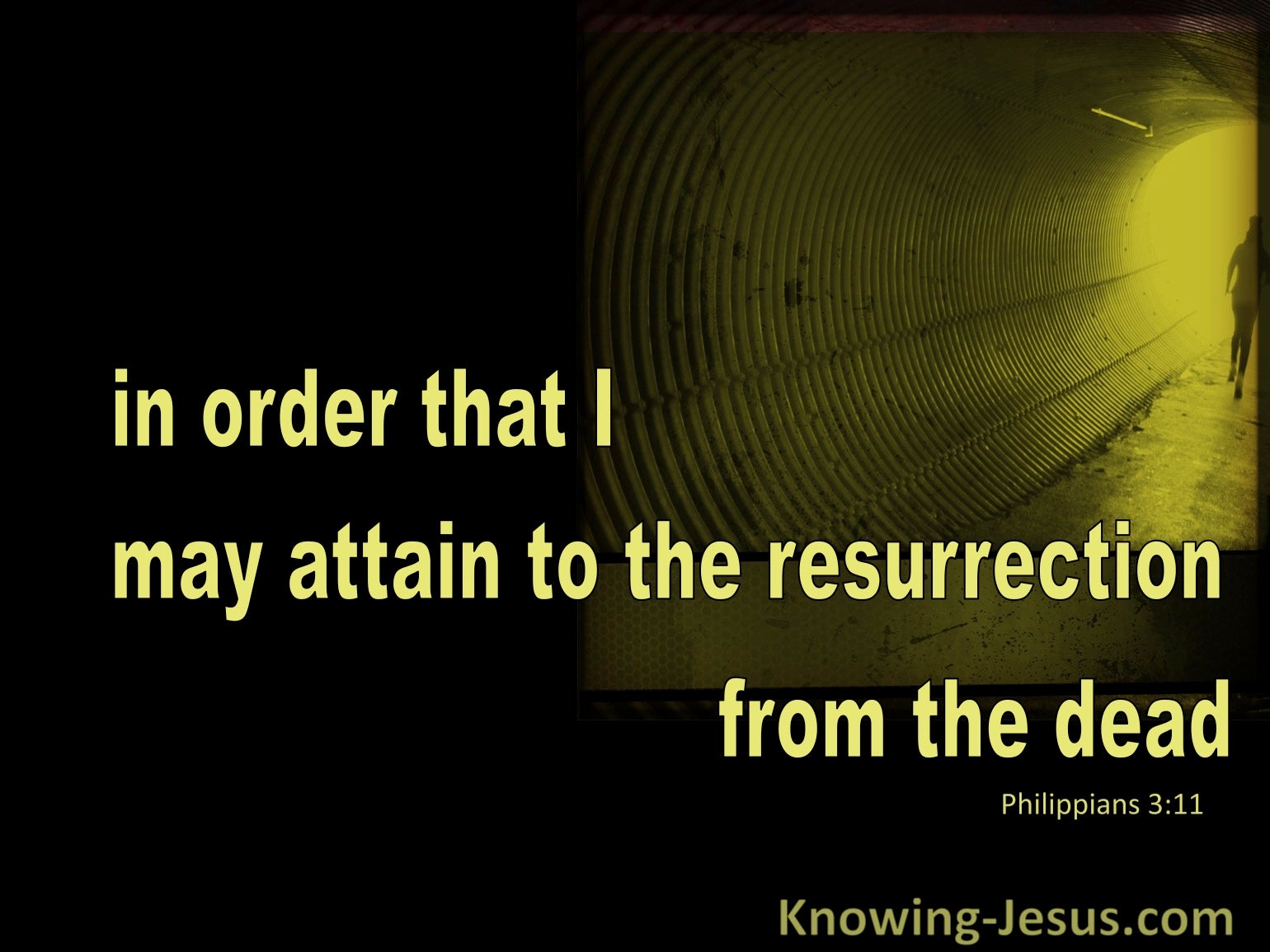 The law of the Spirit of life in Christ Jesus has made me free from the law of sin and death. (Romans 8:2)

Let any of our old man, whether of our old temper, our old way of judging, our old disposition, any of it come up at all, if we are children of God, we know quite well that at that point a barrier is set up and we cannot get past, we are held up in our spiritual life and we have to go back and have that thing cleared up. It is as real as any other thing in the universe to us. At that moment we stand still spiritually, and the flaming sword is across our path. There is no way for that here. Bring that here and you will be judged. You will meet the judgment of God. You will be broken. It is coming up against the fact that God finished with all that long ago and we have to accept God standpoint. When we have accepted it then the thing works out, it continually works out. We take that position, we accept the truth.

We cannot bring an actual endto the old creation ourselves, but we say in a positive way: "Ireckon as God reckons." Well then we shall find as we go on thatGod, having put all that under death, death rests upon it and ifever it shows its head again, the sentence of death is met. If webegin to work for the Lord with our own natural strength we meetdeath and before long our natural strength will come under death.If we begin to use our natural judgment in the things of God weshall meet an arrest and before long we shall come to a deadlock,unable to get through. Anything which we bring of nature into thethings of God will bring us up against not some new issue, but the old issue death which was made to rest upon the oldcreation. In so far as we move in the newness of Life, work bythe Spirit of God, and walk after the Spirit, death is done away andwe are in Life and we can go on and can get through, no matterhow much there may be of handicap and weakness in nature, we canget through as we go on in the Spirit. "The law of theSpirit of life in Christ Jesus made me free from the law of sinand death." We are free!

Then Jesus was led up by the Spirit into the wilderness to be tempted by the devil.

In the days of His flesh, when He had offered up prayers and supplications, with vehement cries and tears to Him who was able to save Him from death, and was heard because of His godly fear, though He was a Son, yet He learned obedience by the things which He suffered. And having been perfected, He became the author of eternal salvation to all who obey Him. § We do not have a High Priest who cannot sympathize with our weaknesses, but was in all points tempted as we are, yet without sin.

No temptation has overtaken you except such as is common to man; but God is faithful, who will not allow you to be tempted beyond what you are able, but with the temptation will also make the way of escape, that you may be able to bear it. § My grace is sufficient for you, for My strength is made perfect in weakness.

The Son of Man did not come to be served,but to serve, and to give His life a ransom for many.

If the blood of bulls and goats and the ashes of a heifer, sprinkling the unclean, sanctifies for the purifying of the flesh, how much more shall the blood of Christ, who through the eternal Spirit offered Himself without spot to God, cleanse your conscience from dead works to serve the living God?

The life of the flesh is in the blood, and I have given it to you upon the altar to make atonement for your souls; for it is the blood that makes atonement for the soul. § Without shedding of blood there is no remission.

While we were still sinners, Christ died for us. Much more then, having now been justified by His blood, we shall be saved from wrath through Him.

Peace does not, and cannot, exist in the fallen Adam life; and as long as the old man reigns within, there is going to be turmoil both within and without. The path of the Cross is alone the path of peace. "The moment came when the Lord Jesus could say, Peace I leave with you, My peace I give unto you' (John 14:27). This could only be on the ground of His death, for the man in Adam could never give up his will: to do so would be to give up his very existence. But the death of the Lord Jesus is - judicially, and for faith - the end of that man, and the Christian walking in the Spirit owns him no more. "The believer can thus, and only thus, have freedom from the tyranny of sin as he reckons himself to have died unto sin, and to be alive unto God as one alive from the dead.' He presents his body a living sacrifice unto God, and proves what is the good and acceptable and perfect will of God. Thus walking, the peace of the Lord Jesus becomes an experiential reality in the heart of the believer. Thank God! we are no longer linked with the fallen Adam, and the Holy Spirit has placed us in union with Christ risen and glorified." -C.A.C. "The more clearly we enter, by faith, into objective truth, or what is true of us in the Lord Jesus, the deeper, more experiential and practical will be the Spirit's subjective work in us, and the more complete will be the manifestation of the moral effect in our life and character." -C.H.M.

"Both He that sanctifieth and they who are sanctified are all of one" (Heb. 2:11).

All Noble Things Are Difficult

If we are going to live as disciples of Jesus, we have to remember that all noble things are difficult. The Christian life is gloriously difficult, but the difficulty of it does not make us faint and cave in, it rouses us up to overcome. Do we so appreciate the marvellous salvation of Jesus Christ that we are our utmost for His highest?

God saves men by His sovereign grace through the Atonement of Jesus; He works in us to will and to do of His good pleasure; but we have to work out that salvation in practical living. If once we start on the basis of His Redemption to do what He commands, we find that we can do it. If we fail, it is because we have not practised. The crisis will reveal whether we have been practising or not. If we obey the Spirit of God and practise in our physical life what God has put in us by His Spirit, then when the crisis comes, we shall find that our own nature as well as the grace of God will stand by us.

Thank God He does give us difficult things to do! His salvation is a glad thing, but it is also a heroic, holy thing. It tests us for all we are worth. Jesus is bringing many "sons" unto glory, and God will not shield us from the requirements of a son. God's grace turns out men and women with a strong family likeness to Jesus Christ, not milk sops. It takes a tremendous amount of discipline to live the noble life of a disciple of Jesus in actual things. It is always necessary to make an effort to be noble.

For God so loved the world that he GAVE  His one and only Son, that whoever believes in Him shall not perish but have eternal life
John 3:16

May you… being rooted and grounded in love… experience the love of Christ, though it is so great you will never fully understand it. Then you will be filled with the fullness of life and power that comes from God.
Ephesians 3:17-18

How is it possible to describe the length of God’s love? Some consider that the length of His love stretches from eternity… to eternity…  and indeed it does! Jeremiah points out that: God loves you with an everlasting love. Jer.31:3, while Paul reminds us that: nothing that can separate us from His love. Rom.8:38. Both tell us that no earthly or heavenly boundaries can divide us from this greatest of love.

And in consideration that there are only three dimensions of measurement, Paul gives us four! – "breadth and length and height and depth." Even in this, Paul points out the superlative love of God, for His own.

But eternal love only scratches the surface of the length of God’s deep love. Everlasting love is only a minute facet of the span of God’s devotion. His infinite love is just one jewel in a casket of brilliant, superlative gemstones. For He yearns with unfathomable, unselfish, tender passion for your love. He longs with a profound, mysterious yearning for the love of His creation.

He gave everything that was precious and dear in His sight… to you. He gave you Himself.. and you blithely give back the meager crumbs that fall from your empty plate! What love is this, that He should forever give

The same man was just and devout… waiting for the consolation of Israel.
Luke 2:25

Jesus was born a Jew and lived His life in full accordance with the Jewish law, for the law, promises, prophecies and salvation must all come through the Jews. And so on the eighth day, after the custom of the law, Jesus was brought to the temple, and there He was seen by Simeon, and the same man was just and devout, waiting for the consolation of Israel, and the Holy Ghost was upon him. Luke 2:25

Simeon was just in his dealings with men and devout in his living towards God. Simeon was one of the remnant of the Jews who sought the Messiah of Scripture. He was not looking for the Saviour in their own imagination.. as did the majority of law-abiding Israelites. It takes the blending of both of Simeon’s characteristics of justice and devotion…  to become a man after God’s own heart. And yet there’s a third characteristic which is often overlooked. This man was 'waiting'.

The just shall live by faith.. and 'waiting' for the Lord is an active expression of faith. For faith is believing what God has said. Faith is trusting Him in all that He has ever said in His word. Simeon was a wonderful example of a man who continued seeking God, all his life. Simeon had a wider view of the consolation of Israel. He had a broader perspective than the numerous religious folk of his day – he recognised the infant Messiah, the Anointed of Israel was also Saviour of the world.

Jesus the Lamb of God

And for his remarkable, child-like faith, Simeon was one to hold and bless the infant Jesus. He held the 'lamb of God' in his arms and blessed the God of the universe. Why? Why should Simeon be granted this exceptional privilege? What was Simeon’s secret? Well, scripture is its own interpreter, and it seems he never ceased in his expectation.