"And it will come about that whoever calls on the name of the LORD Will be delivered; For on Mount Zion and in Jerusalem There will be those who escape, As the LORD has said, Even among the survivors whom the LORD calls. 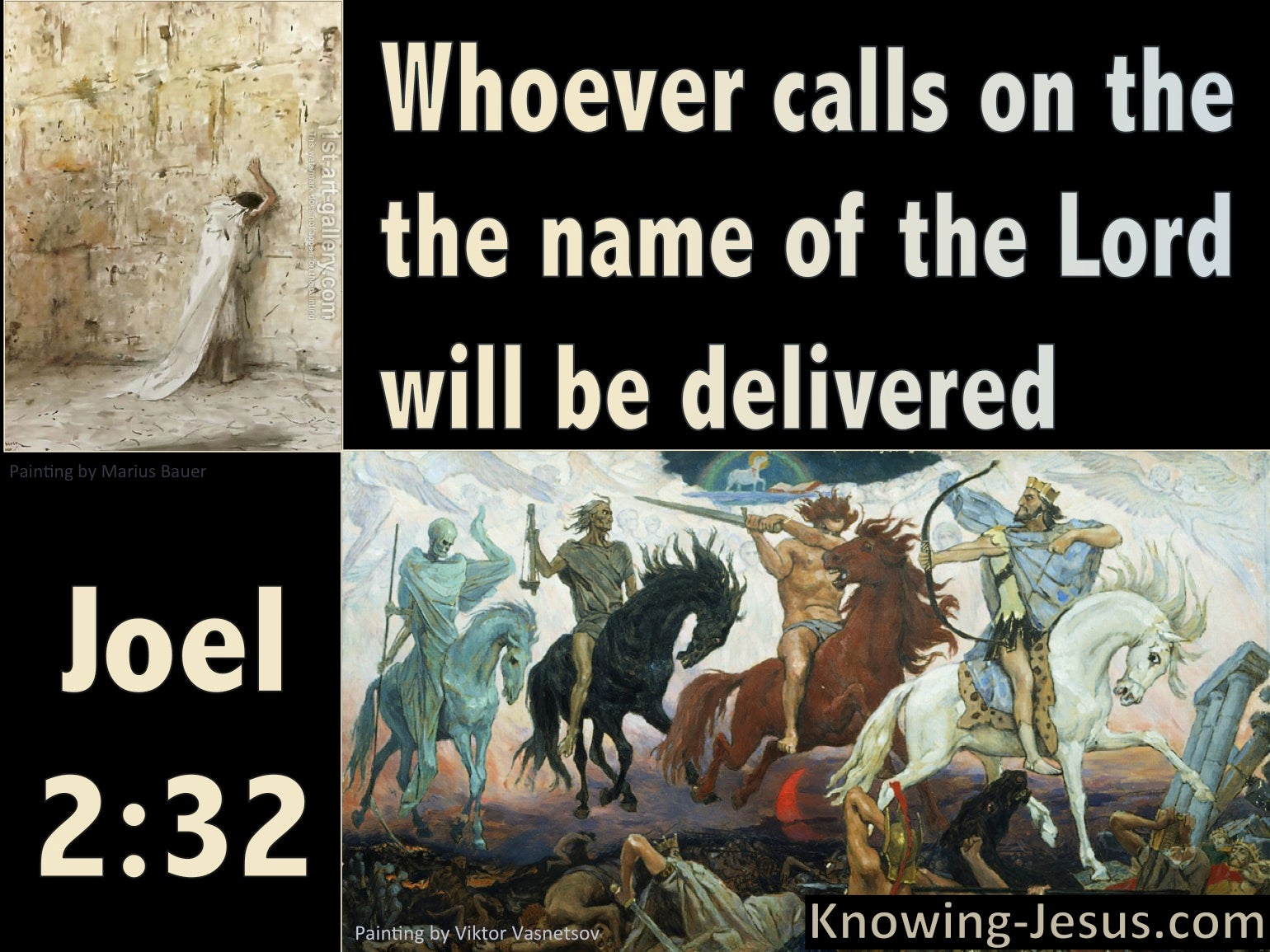 Christ’s Knowledge Of Self

We were dead and buried with Him in baptism, so that just as He was raised from the dead by that splendid Revelation of the Father's power so we too might rise to life on a new plane altogether. If we have, as it were, shared His death, let us rise and live our new lives with Him! (Romans 6:5 Phillips)

In our union with Christ in Hisdeath, we cease and He begins, and from the beginning He becomesthe all. That is a progressive thing, as well as a basic thing.It is a thing all-inclusive in its meaning, in its intent, but itis also progressive. We have to accept the fullness of that thing in an act. We have to take the position quite definitely and consciously that now, in accepting our union with Christ in His death, this is to work out in our having no more place at all, and that whenever we come into evidence we shall be smitten, we shall be put aside, we shall not be allowed to go on. We have to accept that once for all in a definite act of commitment, that from henceforth everything that is of self is going to be smitten unsparingly with that Cross, and whenever self comes in it will not be allowed to have a standing.

We had better settle it once for all, and have a dealing with the Lord on that inclusive, comprehensive, and utter ground, that He will make His own meaning in that real; not our understanding of it, not our grasp or apprehension of it, not what we think to be the "I" which is to be forbidden, but what He knows to be the "I"; not the measure of our knowledge of ourselves, but His knowledge of us. There will be revealed a very great deal more that is "I" than has ever entered into our thought or imagination. Self, then, not as we know it, but as He knows it through and through, is to be brought under the power of that Cross, and this we accept in an act.

If we confess our sins, He is faithful and just to forgive us our sins and to cleanse us from all unrighteousness.

I acknowledge my transgressions, and my sin is always before me. Against You, You only, have I sinned, and done this evil in Your sight.

And he arose and came to his father. But when he was still a great way off, his father saw him and had compassion, and ran and fell on his neck and kissed him. § I have blotted out, like a thick cloud, your transgressions, and like a cloud, your sins. Return to Me, for I have redeemed you. § Your sins are forgiven you for His name’s sake. § God in Christ forgave you. § That He might be just and the justifier of the one who has faith in Jesus.

Then I will sprinkle clean water on you, and you shall be clean. § They shall walk with Me in white, for they are worthy.

Shall the throne of iniquity … have fellowship with You?

Truly our fellowship is with the Father and with His Son Jesus Christ. § Beloved, now we are children of God; and it has not yet been revealed what we shall be, but we know that when He is revealed, we shall be like Him, for we shall see Him as He is. And everyone who has this hope in Him purifies himself, just as He is pure.

The ruler of this world is coming, and he has nothing in Me. § A High Priest … holy, harmless, undefiled.

We do not wrestle against flesh and blood, but against principalities, against powers, against the rulers of the darkness of this age, against spiritual hosts of wickedness in the heavenly places. § The prince of the power of the air, the spirit who now works in the sons of disobedience.

If we fail to rely upon the Holy Spirit for the practical day-by-day realization of the identification truths, we will fall short of Romans 8, and find ourselves bound in the struggle of Romans 7.

"Such is the fruit of the Holy Spirit's government in our lives. Even if we are totally unable to obey and cannot even exercise faith, a day comes when the resistance has vanished and we are trusting the Lord Jesus in simplicity of heart. It is the tireless energy of the indwelling Spirit that has accomplished this.

"The trouble is that many are not aware of this wonderful fact and position; all of it seems so far away and unreal. If we will believe God's Word and begin to thank Him for the truths that He tells us, the Holy Spirit will ere long begin to make these truths living realities in our lives." -L.L.L.

"And hath raised us up together, and made us sit together in heavenly places in Christ Jesus" (Eph. 2:6).

The Will To Loyalty

Will is the whole man active. I cannot give up my will, I must exercise it. I must will to obey, and I must will to receive God's Spirit. When God gives a vision of truth it is never a question of what He will do, but of what we will do. The Lord has been putting before us all some big propositions, and the best thing to do is to remember what you did when you were touched by God before - the time when you were saved, or first saw Jesus, or realized some truth. It was easy then to yield allegiance to God; recall those moments now as the Spirit of God brings before you some new proposition.

"Choose you this day whom ye will serve." It is a deliberate calculation, not something into which you drift easily; and everything else is in abeyance until you decide. The proposition is between you and God; do not confer with flesh and blood about it. With every new proposition other people get more and more "out of it," that is where the strain comes. God allows the opinion of His saints to matter to you, and yet you are brought more and more out of the certainty that others understand the step you are taking. You have no business to find out where God is leading, the only thing God will explain to you is Himself.

Profess to Him - 'I will be loyal.' Immediately you choose to be loyal to Jesus Christ, you are a witness against yourself. Don't consult other Christians, but profess before Him - I will serve Thee. Will to be loyal - and give other people credit for being loyal too.

For God SO loved the world that he GAVE His one and only Son, that WHOSOEVER believes in him shall not perish but have eternal life.
John 3:16

The love of God stoops down to the sin-encrusted earth from His hallowed heaven. The love of God scrapes up from humankind the sick, suffering, sin-stained sinner. The love of God rakes from the pit of hell, fallen sons and daughters of Adam. And yet He knew that He – the Giver of life and love, would be so despised and rejected. He knew that the precious Son of His love would be oppressed, and afflicted by men. He knew His chosen, anointed One, would be led as a lamb to the slaughter by those He came to save. He knew that the chastisement for our peace was upon Him... His own dear Son, and that by His stripes we are healed.

And yet it pleased the LORD to bruise Him; He has put Him to grief. When You make His soul an offering for sin, and the pleasure of the LORD shall prosper in His hand. Isa.53:10 – and you know, child of God – He did this because you are so precious to Him.

Yet is not that wise saying, so very true.. that familiarity breeds contempt? Isn’t it so that being close to a person can engender disdain, disinterest, disrespect – instead of a deepening intimacy, and a love and longing to know them more and more. It seems we are

And it was revealed unto him [Simeon] by the Holy Ghost, that he should not see death, before he had seen the Lord’s Christ.
Luke 2:26

It is a truly fearful thing for anyone to see death before seeing Christ Jesus. Death is a fearful thing – it is the portal that will usher us all into a coming judgment. But for the aged Simeon, death was no future fretful fear for he had a promise... that he should not see death, before he had seen the Lord’s Christ. Luke 2:26

His eyes were to be illumined by Christ, before death seized its prey. He was to see the Consolation of Israel – the Saviour of mankind. And from the moment he received the Spirit illumined pledge to see the Anointed-One, Simeon knew!  Simeon had hope in his heart that his promised pledge would come to pass. By faith, Simeon knew that he would not see death – until…

His future held no fear and each day that passed he must have thought.. is it today…?   Few have received such an astonishing promise, but those who received such a pledge, must accept it, unquestioningly by faith. "By faith, Enoch was translated that he should not see death" Heb.11:5.  Elijah also knew, from the Spirit, that his transport awaited him by faith, and he was able, through the Spirit’s leading to grant his young disciples request..  and Elijah said:- "if thou shall see me [when I am] taken from thee, it shall be so unto thee".  2Kings 2:10

By faith Enoch, Elijah, Simeon believed the promise and lived in expectant waiting. Enoch waited his translation, Elijah his transport and Simeon to see the Lord’s Christ. Enoch waited for over 400 years and Simeon waited for the rest of his life. Their promise was given, accepted, believed, and they waited in humble anticipation.

No doubt discouragement hit each at times as we see in Elijah. No doubt the passing of time must have raised questions as to, "When Lord When?"