Children, be obedient to your parents in all things, for this is well-pleasing to the Lord. 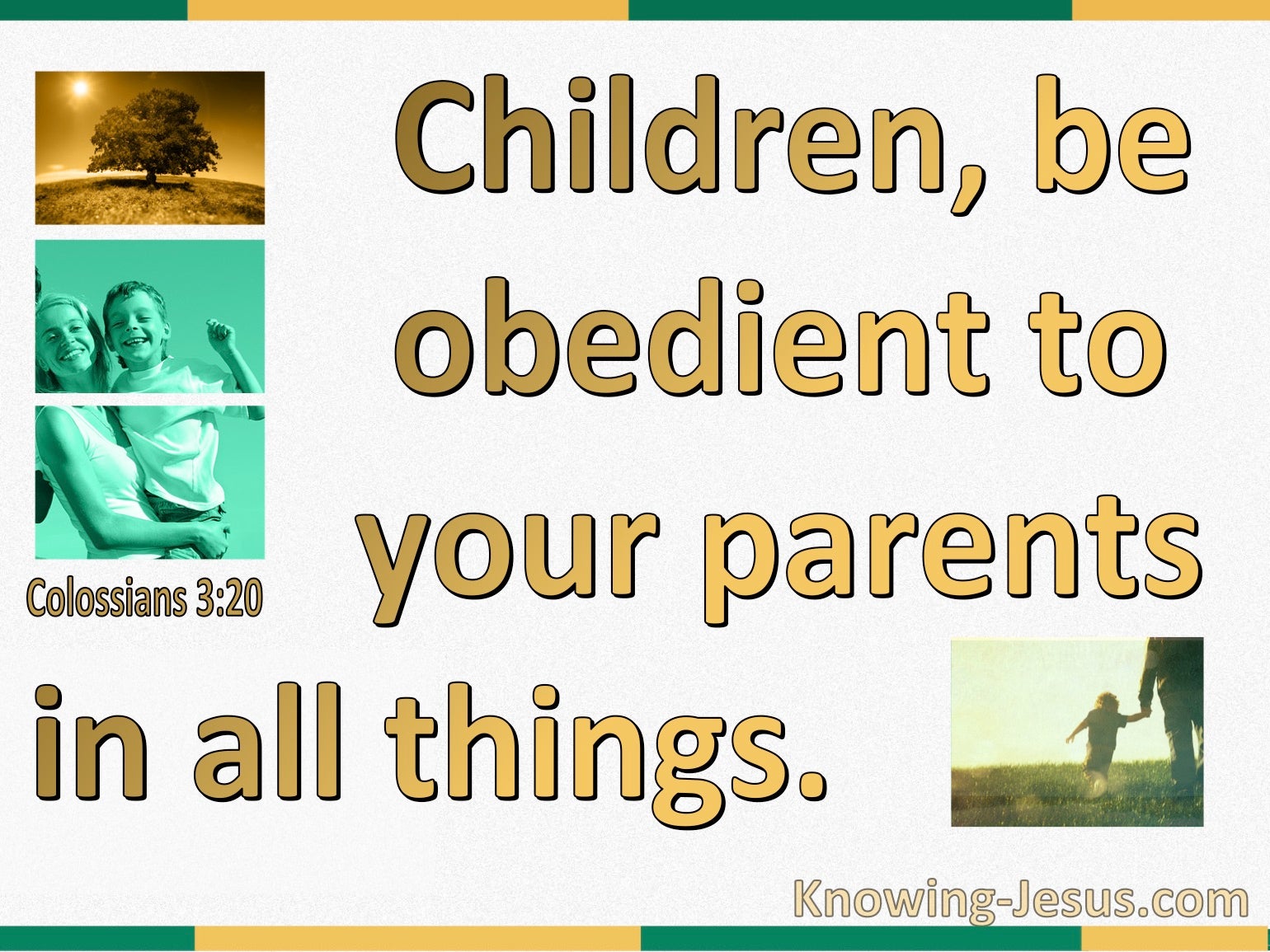 It is the Spirit who gives life; the flesh accomplishes nothing. The words that I have spoken to you are spirit and life. (John 6:63 ISV)

Do you notice that whenever the Spirit is mentioned the Spirit is related to Life? Life, then, is a matter of righteousness. The "ministration of righteousness" means the ministration of Life, or the standing in Life with an unveiled face, without fear of condemnation, or judgment. It is most important to recognize this truth. It is elementary. It is one of the first things of our faith. It may sound technical, but the Lord's people need instruction. It is good to have exhortation; it is good that we should have testimony; it is good that from time to time the Word of the Lord should come to us in the fullness of a proclamation, but as the Lord's people we also need sound instruction, foundation in the truth.

There are today a great number of the Lord's people who are finding it well nigh impossible to stand their ground because their foundation is not solid. After all, their relationship to the Lord has been very largely an emotional one, one of ecstasy, and when it comes to sounding the foundation of truth, they are not well grounded; when the enemy comes, and the storms beat upon them, they do not know where they are. When the ecstasies and the emotions and all the more superficial elements in our salvation are brought under the stress of terrific opposition; when in addition to that the enemy lays on his accusations, then the foundations are discovered, and many, many breakdown. It is not that they are lost, if they have trusted the Lord, but, so far as their enjoyment of their salvation is concerned, they lose it. So it is necessary for us to be thoroughly instructed in the Word, and this is one of the things about which we must be perfectly clear in heart and mind, and assured in spirit, that Life, with all that it means the Life of an unveiled fellowship with the Lord, the Life which in itself sets forth victory over death and the abolishing of condemnation that Life is rooted in righteousness, a ministration of righteousness. It must be possible for us to say with perfect assurance and confidence before God: "Lord, what I am as apart from Christ is one thing; what I am by faith's union with Christ is that I am righteous with Thine own righteousness; I cannot be destroyed, I cannot come under condemnation!" You can challenge God on that ground, if we may so speak. God invites us to test Him on that ground.

Always pursue what is good.

For to this you were called, because Christ also suffered for us, leaving us an example, that you should follow His steps: “who committed no sin, nor was deceit found in His mouth;” who, when He was reviled, did not revile in return … but committed Himself to Him who judges righteously. § Consider Him who endured such hostility from sinners against Himself, lest you become weary and discouraged in your souls.

Let us lay aside every weight, and the sin which so easily ensnares us, and let us run with endurance the race that is set before us, looking unto Jesus, the author and finisher of our faith, who for the joy that was set before Him endured the cross, despising the shame, and has sat down at the right hand of the throne of God.

You are fairer than the sons of men; grace is poured upon Your lips; therefore God has blessed You forever. Gird Your sword upon Your thigh, O Mighty One, with Your glory and Your majesty. And in Your majesty ride prosperously … Your throne, O God, is forever and ever; a scepter of righteousness is the scepter of Your kingdom. § Then You spoke in a vision to Your holy one, and said: “I have given help to one who is mighty.” § “The Man … is My Companion,” says the Lord of hosts.

Behold, God is my salvation, I will trust and not be afraid; for Yah, the Lord, is my strength and my song; He also has become my salvation. § Thanks be to God who always leads us in triumph in Christ.

Now to Him who is able to keep you from stumbling, and to present you faultless before the presence of His glory with exceeding joy, to God our Savior, who alone is wise, be glory and majesty, dominion and power, both now and forever.

Resting In His Rest

Until we grow beyond the childish realm of sight and feelings we cannot go forward; up and down, and sideways, but not forward.

"Our Father wants us in the place where we do not depend upon feelings; where, though we do not behold Him, though we do not sense Him, we shall endure as beholding Him who is invisible.' He wants us where we can trust Him through darkness and apparent separation, as unflinchingly as in light and fellowship; where we know that His banner, Love, is always floating over us, though it is so dark that we cannot see it.

"There is no grace in delighting in the presence and favor of the Father when they are resting consciously and continuously upon us; for this rejoicing comes from sight and feelings. But there is precious grace in that delight which is not dependent upon His favors, nor upon our enjoyment of them; but which is wholly dependent and has its source in the Father's explicit Word, and His eternal faithfulness." -C.H.M.

"When circumstances seem impossible, when all signs of grace in you seem at their lowest ebb, when temptation is fiercest, when love and joy and hope seem well nigh extinguished in your heart, then rest, without feeling and without emotion, in the Father's faithfulness; abide in the fact that He loves you infinitely, and even now is working in you faithfully; and honor Him, and put the enemy to flight by taking to yourself the words of Job: Though He slay me, yet will I trust in Him.' I have prayed for thee' (says the One who ever lives to make intercession for us) that thy faith fail not.'" -D.T.

"Cast not away, therefore, your confidence, which hath great recompense of reward" (Heb. 10:35)

What shall we say then? Shall we continue in sin that grace may abound? Certainly not!  May it never be! How shall we who died TO sin still live in sin?
Romans 6:1-2

Liberty of the Cross

Paul wants the believer to discover the liberation that he found in the cross of Christ. He longs that Christians truly understand the glory and wonder of God’s grace. Paul was thrilled to explain that all aspects of sin and death are dealt with by the cross. The cross of Christ dealt with both the sins we commit and the sin nature inherited from Adam.

The first 7 verses of Romans chapter 6 spell out the significance of being crucified unto sin. This short passage gives a bird's-eye view of a believer’s identification with Christ. This precious portion of Scripture unfolds the advantages of grace – in logical steps. And in a series of rhetorical questions, Paul gently guides us through the gates of grace.

Chapter after chapter and verse-by-verse, Paul reveals the glories of justification – the fall into sin by one man:- Adam.. which plunged the human race into death, so that the transgression of one man resulted in the condemnation of the human race. The gift of salvation that was freely bestowed on us through one Man:- Christ Jesus, so that by the obedience and righteousness of one Man, many were made righteous – for by His death and resurrection the consequences of sin were done away with.

Paul builds up his case by showing that the Law’s perfection caused sins to increase. Men’s inability to keep the Law demonstrated the amazing grace of our justification, showing that where sin increased, the grace of God abounded all the more. Finally, the building blocks of Paul’s reasoning led him to ask the intriguing question: What shall we say then? Shall we continue in sin that grace may abound all the more?

Having demonstrated God’s amazing gift of salvation by grace through trusting Christ, Paul paraphrases a question he knows must

Jesus the Great I AM

A few years ago I heard of a famous new-age pop-idol proclaim, I am god! She pranced nearly naked on a Californian beach – hands raised in adoration of self. As I watched this spectacle in sadness my thoughts turned to Psalm 2… I tried to imagine how God must laugh at such misguidance and blind foolishness.

But this elevation of self above the self-existent God is also rife in Christendom too. This prideful desire to promote man to 'be as God’ has its roots in the garden of Eden. The branches of pride tentacle their way into every thought of man’s heart and mind.

Warnings against this virulent disease are administered throughout Scripture, but when we think we have chained this giant, we are most susceptible to his reach. The foolish words of philosophers and poets alike often helped to promote this myth – that the study of self is a key to wisdom and a door to success, joy, and contentment.

It was the poet Alexander Pope that is famous for his foolish words: know then thyself, presume not God to scan.. the proper study of mankind is man!!.. But His “enlightenment” is a philosophy that is diametrically opposed to the truth. This is another subtle fabrication of the enemy who seeks to destroy the soul.

Perhaps a wiser and more honest ditty could be rewritten as: 'know then thyself, presume not man to applaud.. the proper study of mankind is God'. For when we know the truth of God in the word of God, we see man, for what he is. Man is created in the image of God in utter dependence on God.. for in Him that we live and move, and have our being. Acts 17:28

All things hold together by His grace and the strength of His mighty power alone:- including the foolish little actress, the misguided poet, and the atheistic philosopher. O fools, and slow of heart to believe all that the prophets have spoken Luke 24:25 Jesus