having been buried with Him in baptism, in which you were also raised up with Him through faith in the working of God, who raised Him from the dead. 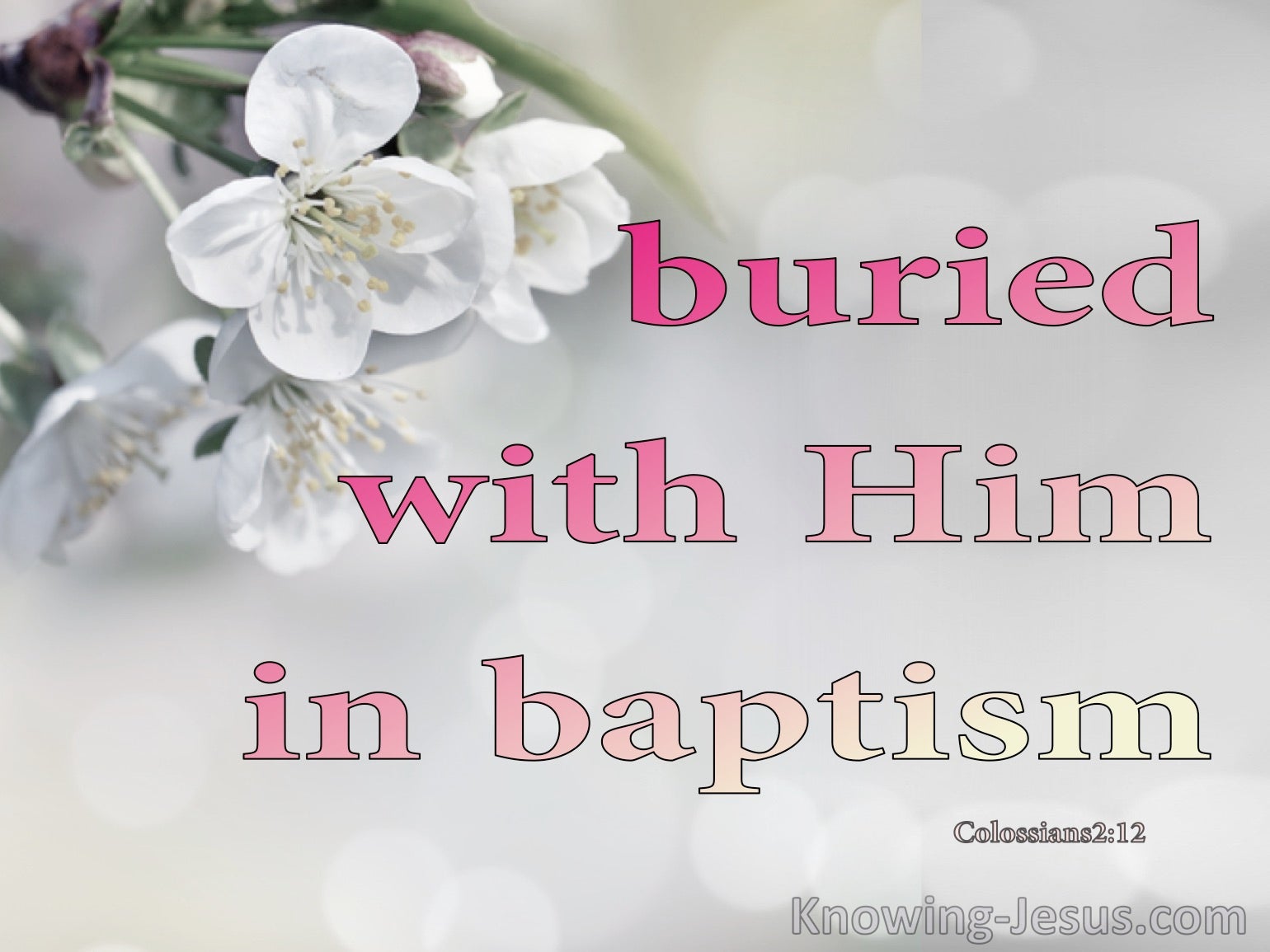 Our sufficiency is from God. (2 Corinthians 3:5)

We go through times of trial and test under the hand of God, and it is so easy to get into that frame of mind which says in effect, 'The Lord does not want us, He need not have us!' We let everything go, we do not care about anything; we have gone down under our trials and we are rendered useless. I do not believe the Lord ever comes to a person like that to take them up. Elijah, dispirited, fled to the wilderness, and to a cave in the mountains; but he had to get somewhere else before the Lord could do anything with him. "What doest thou here, Elijah?" (1 Kings 19:9). The Lord never comes to a man and recommissions him when he is in despair. "God shall forgive thee all but thy despair" (F. W. H. Myers, "St. Paul") because despair is lost faith in God, and God can never do anything with one who has lost faith....

A great deal is made of the natural side of many of the Lord's servants, and usually with tragic results. A lot is made of Paul. 'What a great man Paul was naturally, what intellect he had, what training, what tremendous abilities!' That may all be true, but ask Paul what value it was to him when he was right up against a spiritual situation. He will cry, "Who is sufficient for these things?" "Our sufficiency is from God" (2 Cor. 2:16; 3:5). Paul was taken through experiences where he, like Moses, despaired of life. He said, "We... had the sentence of death within ourselves, that we should not trust in ourselves, but in God which raiseth the dead" (2 Cor. 1:9).

Their Redeemer is strong.

I know your manifold transgressions and your mighty sins. § I have given help to one who is mighty. § I, the Lord, am your Savior, and your Redeemer, the Mighty One of Jacob. § Mighty to save. § Able to keep you from stumbling. § Where sin abounded, grace abounded much more. He who believes in Him is not condemned; but he who does not believe is condemned already, because he has not believed in the name of the only begotten Son of God. § He is also able to save to the uttermost those who come to God through Him.

Is My hand shortened at all that it cannot redeem?

Do you seek great things for yourself? Do not seek them.

Take My yoke upon you and learn from Me, for I am gentle and lowly in heart, and you will find rest for your souls. § Let this mind be in you which was also in Christ Jesus, who, being in the form of God, did not consider it robbery to be equal with God, but made Himself of no reputation, taking the form of a bondservant, and coming in the likeness of men. And being found in appearance as a man, He humbled Himself and became obedient to the point of death, even the death of the cross.

He who does not take his cross and follow after Me is not worthy of Me. § Christ… suffered for us, leaving us an example, that you should follow His steps. § Godliness with contentment is great gain. For we brought nothing into this world, and it is certain we can carry nothing out. And having food and clothing, with these we shall be content.

I have learned in whatever state I am, to be content.

There are three vital factors that will keep us on the path, and in the power, of spiritual growth: (1) study to know that God's purpose in saving us is to conform us to the image of His Son (Rom. 8:28, 29); (2) learn to reckon upon the finished work of the Cross as His provision for that purpose (Rom. 6:11); (3) yield to the Holy Spirit as He carries out the daily process of that purpose (2 Cor. 4:11).

"Christ Jesus' earthly life showed the path, His heavenly life gives the power, in which we are to walk. What God hath joined together no man may separate. Whosoever does not stand in the full faith of the Redemption, has not the strength to follow the Example. And whosoever does not seek conformity to the Image as the great purpose of Redemption, cannot fully enter its power. Christ lived on earth that He might show forth the image of God in His life; He lives in heaven that we may show forth the image of God in our lives." -A.M.

"God has but one way of revealing Himself, it is Christ in you.' He has no other way of showing Himself to men except as Christ lives in us; not by the Shekinah glory in the temple built with hands of men, but in lives redeemed and freed and cleansed as they walk about in this dark world with Christ living in them." -L.L.L.

"And we all, while with face unveiled we behold in a mirror the glory of the Lord, are ourselves transformed continually into the same likeness; and the glory which shines upon us is reflected by us, even as it proceeds from the Lord, the Spirit" (2 Cor. 3:18, Cony.).

The Relapse Of Concentration

“But the high places were not taken away out of Israel; nevertheless the heart of Asa was perfect all his days.” 2 Chronicles 15:17

Asa was incomplete in his external obedience, he was right in the main but not entirely right. Beware of the thing of which you say - "Oh, that does not matter much." The fact that it does not matter much to you may mean that it matters a very great deal to God. Nothing is a light matter with a child of God. However much longer are some of us going to keep God trying to teach us one thing? He never loses patience. You say - "I know I am right with God"; but still the "high places" remain, there is something over which you have not obeyed. Are you protesting that your heart is right with God, and yet is there something in your life about which He has caused you to doubt? Whenever there is doubt, quit immediately, no matter what it is. Nothing is a mere detail.

Are there some things in connection with your bodily life, your intellectual life, upon which you are not concentrating at all? You are all right in the main but you are slipshod; there is a relapse on the line of concentration. You no more need a holiday from spiritual concentration than your heart needs a holiday from beating. You cannot have a moral holiday and remain moral, nor can you have a spiritual holiday and remain spiritual. God wants you to be entirely His, and this means that you have to watch to keep yourself fit. It takes a tremendous amount of time. Some of us expect to "clear the numberless ascensions" in about two minutes.

Cause and Effect of Sin - Growing In Grace (7)

in this world we will have tribulations but be of good cheer, He says, I
have overcome the world.
John 16:33

I am exceeding joyful in all our tribulation. I also glory in tribulations, knowing that tribulation produces perseverance.
2 Corinthians 7:4

Too often sinners are not told the entire truth by other believers. Salvation by grace through faith is certainly the most wonderful news that any sinner can be told but the Christian life is not an easy path to tread and all too frequently suffering and pain comes in its wake. Difficulties and trials are inevitable as we travel through life, but how important for Christians to understand the cause of sin, the effects of sin, the consequences of sin and how to live godly in Christ Jesus.

We all delight in the wonderful news that all our sins have been forgiven, past present and future, and rightly so – but new believers should also be trained up in the Christian life and understand about post-salvation sins, and all to often they can affect our relationship to God and our fellowship with Him. If the reality of the Christian life is not understood, believers can all too often become spiritually defeated – because they never learned the truth.

Pressure and suffering is a reality for every Christian. Difficulty and disappointments are integral to the believer’s world, but in Christ, we have been supplied with all we need to live a godly life and we are even exhorted to be joyful in our sufferings. We are not promised to be removed from our suffering but to be enabled in our sufferings. Jesus reminded us that: in this world we will have tribulations but be of good cheer, He says, I have overcome the world. John 16:33.

Suffering and pain is indeed a reality but sin is also a reality in a believer’s life. We do not become sinless when we believe in Jesus, we become saved. And although the power sin

Jesus said, I am the way and the truth and the life. No man comes to the Father but by Me
John 14:6
He who did not spare His own Son, but gave Him up for us all, how will He not also, along with Him, graciously give us all things?
Romans 8:32

Truth is a Person

There is a truth that is timeless, a truth that is eternal – a truth that is non-negotiable. That Truth is a Person and not a dogma, a philosophy a creed or a theology. When Jesus Christ announced: I AM is the truth, He was telling us that all things proceed from Him, and in Him, everything is rooted and grounded.

In today’s modern world, ‘truth’ has become a relative issue and is based on the thoughts, opinions, desires, and lusts of fallen man, but when Christ announced this earth-shattering truth, He placed truth in the realms of the eternal, for He is the singular interpretation of truth,  and everything we need to know about God and man is inextricably bound up in Him.

He demonstrated the relationship that man should enjoy with the Father and He displayed the way that man should live on earth. And all who profess Christ crucified and own Him as the truth upon which their lives are founded, should maintain their steady gaze upon the singular Person of Christ Jesus.

When Jesus made His earth-shattering statement: I am the way and the truth and the life, He was informing us that only through His perfect life, sacrificial death, and glorious resurrection, can we ever become reconciled to God and united with Him, for only through Jesus can we live a God-breathed life in spirit and truth.

The Fullness of Truth

When the eternal God became perfect Man, He became man in the fullest sense of the word. He became what man was created to be. He behaved how man is intended to behave and He lived His life in perfect communion with the Father, just