yet I say to you that not even Solomon in all his glory clothed himself like one of these. 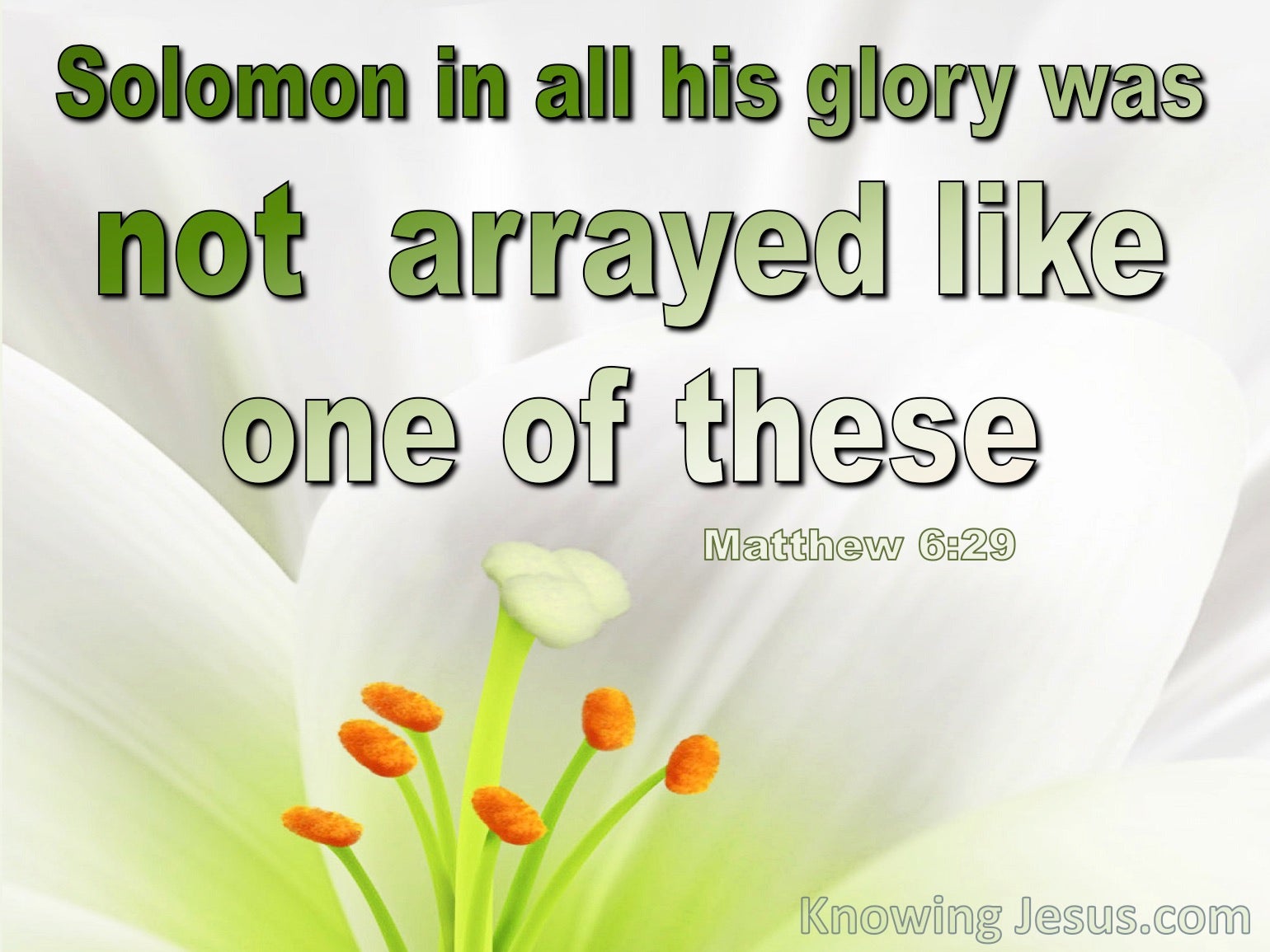 God in all His fullness was pleased to live in Christ. Colossians 1:19 NLT

Do not take these as just words. Do understand that in every fragment there is this truth: In the dispensation in which you and I are now living God has come to us in all His fullness. There is no more to be added. In His Son we have the absolute fullness of God, and it is out of that fullness that He speaks to us in His Son. God has only one Son in that sense – His only-begotten Son, which means that there is no one to come after Him. Therefore, God's last word is in His Son. The Son brings both the fullness and the finality of God.

It is that which gives the solemnity to this whole Letter. It says: "If you fail to hear the voice of the Son there will never be another voice for you. God is never going to speak by another voice. God hath spoken in His Son, and He is never going to speak by any other means." Hence this Letter contains this word of warning and of exhortation: "Because this is the fullness and this is the end, be sure that you give heed...." To come into touch with the Lord Jesus is more than coming into touch with a teaching: it is coming into touch with a living, active Person. "It is God with whom we have to do." It is a glorious thing to come into touch with God in Christ – but it says here that "it is a fearful thing to fall into the hands of the living God" (Hebrews 10:31). No, it is not a book, a teaching, a philosophy: it is a living, positive, powerful Person....

Perhaps this is just like a window opened into heaven. If you get the right window you can see quite a lot. You can see great things and you can see far things. But the best that I can hope is that this has just opened a window, and that as you look through it you are seeing one thing – how superior is Jesus Christ to all else, and how superior is the dispensation into which we have come, and how superior are all the resources at our disposal to all that ever was before!

The king held out  … the golden scepter …Then Esther went near and touched the top of the scepter.

And it will be that when he cries to Me, I will hear, for I am gracious. We have known and believed the love that God has for us. God is love, and he who abides in love abides in God, and God in him. Love has been perfected among us in this: that we may have boldness in the day of judgment; because as He is, so are we in this world. There is no fear in love; but perfect love casts out fear, because fear involves torment. But he who fears has not been made perfect in love. We love Him because He first loved us.

Let us draw near with a true heart in full assurance of faith, having our hearts sprinkled from an evil conscience and our bodies washed with pure water. § For through Him we both have access by one Spirit to the Father. § We have boldness and access with confidence through faith in Him. § Let us therefore come boldly to the throne of grace, that we may obtain mercy and find grace to help in time of need.

“What is it?” Moses said to them, “This isthe bread which the Lord has given you to eat.”

Without controversy great is the mystery of godliness: God was manifested in the flesh. § The bread of God is He who comes down from heaven and gives life to the world.

Your fathers ate the manna in the wilderness, and are dead. § If anyone eats of this bread, he will live forever; and the bread that I shall give is My flesh, which I shall give for the life of the world. § My flesh is food indeed, and My blood is drink indeed.

The children of Israel … gathered, some more, some less … He who gathered much had nothing left over, and he who gathered little had no lack … They gathered it every morning, every man according to his need.

If ye, then, be risen with Christ, seek those things which are above, where Christ sitteth on the right hand of God" (Col. 3:1).

Spiritual hunger and thirst are fulfilled in the Lord Jesus, while at the same time they are enlarged for more of Him. This satisfaction overwhelms all lesser longings. Fleshly yearnings are never fulfilled, and every attempt at such satisfaction soon cloys.

"Do we think of, and rejoice in, our blessings more than in the Person in whom we have them? As to even our doctrinal blessings, there is a wonderful charm about them when they are new to us, and they sustain the soul for a certain time; but when the first joy of them passes away, a settling-down process commences. Every new bit of blessing may seem to put a new bit of life into us, but it gradually loses its luster and power, and we become just ordinary Christians - we make very little progress.

"It is as we take the Lord Jesus by faith into the affections of our hearts that we make spiritual progress. It is as He occupies an enlarged place in our affections that we go on. The head may be filled with general theological information without producing one spark of heart-affection for the Lord Jesus, and the soul remains in a state of spiritual emaciation.

"Many have been misled by thinking that by reading the Bible you become like Christ - transformed; but you will find diligent students of the Word, who may never say anything incorrect in doctrine, yet who never seem to grow in grace and walk in spiritual reality.

"All blessings of this dispensation of grace are wrapped up in a Person, and, by means of the Word of God, we make spiritual progress as our hearts learn to find everything in Him - the Son of God who loved us and gave Himself for us." -C.A.C.

"He satisfieth the longing soul, and filleth the hungry soul with goodness" (Ps. 107:9).

Am I Convinced By Christ?

“Notwithstanding in this rejoice not … , but rather rejoice because your names are written in heaven.” Luke 10:19,20

Jesus Christ says, in effect, Don't rejoice in successful service, but rejoice because you are rightly related to Me. The snare in Christian work is to rejoice in successful service, to rejoice in the fact that God has used you. You never can measure what God will do through you if you are rightly related to Jesus Christ. Keep your relationship right with Him, then whatever circumstances you are in, and whoever you meet day by day, He is pouring rivers of living water through you, and it is of His mercy that He does not let you know it.

When once you are rightly related to God by salvation and sanctification, remember that wherever you are, you are put there by God; and by the reaction of your life on the circumstances around you, you will fulfil God's purpose, as long as you keep in the light as God is in the light.

The tendency to-day is to put the emphasis on service. Beware of the people who make usefulness their ground of appeal. If you make usefulness the test, then Jesus Christ was the greatest failure that ever lived. The lodestar of the saint is God Himself, not estimated usefulness. It is the work that God does through us that counts, not what we do for Him. All that Our Lord heeds in a man's life is the relationship of worth to His Father. Jesus is bringing many sons to glory.

You examine the Scriptures carefully because you suppose that in them you have eternal life. Yet they testify about Me.
John 5:39

I remember as a little girl reading in the fly-leaf of my mother’s Bible that there are about 300 prophecies of Christ’s first coming foretold in the Old Testament and fulfilled in the New Testament. Every one was carried out to the letter – in and through the Person of the Lord Jesus Christ. The eternal Son of God took upon Himself human flesh and became the perfect Son of Man – but had the Man Christ Jesus been anything but fully human, He could never have fulfilled this plethora of prophecies that authenticate – to the letter, His descendancy from His father Abraham and His legitimate right to the throne of David:– His anointed position as Israel’s coming Messiah and their rightful King.

Had the Lord Jesus been anything but fully human, many of the prophecies of Scripture would have remained unfulfilled for only as man’s Kinsman-Redeemer, Who was like unto His brothers in every way – (and yet was without sin), could the Lord Jesus Christ have become our Saviour, and obediently carry out the demands of a holy God, in submission to His Father – and in so doing give His life as a ransom for many.

The Bible was written by about 40 different authors, over a thousand years period in three languages, but its content can be read as one, unified whole. It is considered by some of the finest mathematical minds that the odds of Jesus fulfilling all 300 Old Testament prophecies is immeasurable – indeed it has been calculated that the probability of only 8 prophecies being fulfilled by one man is a ratio of 1:28 which is 1 : 10,000,000,000,000,000,000,000,000,000.

The inerrant Word of God authenticates to the letter the fulfilment of every single prophecy of Christ’s first advent, but had the Lord Jesus not been fully Man as well being undiminished Deity, many of those prophecies could

All our movements, meeting and motives should be under the direction of God. All our risings and sleepings – all our actions and attitudes. In days gone by God guided His people Israel with pillars of fire and cloud. They rose and moved, followed, halted and struck camp as God showed the way.

But God no longer leads His people with fire and cloudy pillars. Today we have fuller revelation and such signs and wonders have been replaced. Today there is no need for such visible tokens of guidance – for we have the indwelling Spirit. Today we live by faith in Him. We live by faith alone, and not by sight or signs. Our faith comes by hearing and not vision or supernatural phenomena: Faith comes by hearing and hearing by the Word of God – and yet today God’s leadings are no less real and His direction no less unmistakable.

Sometimes we are faced with deep doubt, distrust or disbelief. Sometimes we pass through seasons of pain and our hearts almost faint. Sometimes we simply wonder where God is as trials and difficulties mount up –  but He is as close to us today as those times when He led with mighty visible signs.

It is His Word of truth and not our own clamourings that will guide us in the way we take, and it is His indwelling Spirit of Truth and not visible sight that will guide us into all truth – “he who has ears to hear – let him hear what the Spirit says:… Rev.2:29 And your ears shall hear a word behind you, saying: “This is the way, walk in it,” when you turn to the right or when you turn to the left.

It is His Word that will confirm His promises to our listening heart. It is His indwelling Spirit Who will prompt, this is the way, walk in it. He brought His people to the brink of deep despair by